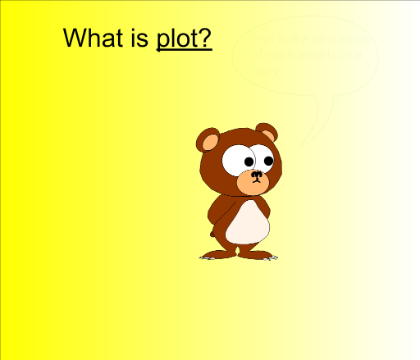 Let’s talk about plot and structure. We all have to deal with them sooner or later. They’re the engine to our story, the way we put our ideas into motion and thread them all together.  It’s different for every writer. Just like music you have the melody and lyrics, writers have plot and dialogue. Some go dialogue first, some go plot.

Also, remember that a lot of this advice comes from Donald Maass’s Writing the Breakout Novel Workbook.

“Begin every story in the middle. The reader doesn’t care how it begins, he wants to get on with it.”
Louis l’Amour

If you want and feel it make the central conflict as deep and as bad as it can possibly be.

Look through your story and at the end of each chapter identify the external and internal turning points and connect them to the main structure of the plot. Then either draw it out, write it out with bullet points, or color code the events and how they are connected. By doing this you will be able to identify and mark your plot in a simple skeleton sketch of the story.

See if your plot is similar to any of the story types or plot structure types.

Another way to look at a plot structure is:

The Balance. The Unbalance.

The Climax. The New Balance.

Kurt Vonnegut on the Shapes of Stories (Watch This!)

So when you’re having trouble with the plot, where to go, what to do or just where to start when you find yourself at a dead end try these tricks to freshen up the writing process while also developing the plot more. They’re from Ben Winters, author of The Last Policeman. We talked about them here, too.

Also, don’t be scared to make these particular things happen within your plot. They are cheesy and you see them everywhere but when reading a story these are some things that make the novel real and help connect the reader to the plot and story.

And like I said above connect the readers to the characters and make them want to read more.

What I Learned/Figured Out This Week

1. Get into your plot or the action of the story early. Readers do care about what happens before the action starts but they care more about the plot and action of right now more.

3. If you need to write or draw out the plot and all the turning points within your story to help visualize what’s going on and keep it clean, tidy and concise so not even the writer gets confused.

Let’s just begin by putting this out there: I love outlining. I work as a tutor and some of the first things that I tell people who need study tips are MAKE OUTLINES! OUTLINE YOUR NOTES! OUTLINE YOUR LIFE! OUTLINES FOR EVERYONE!!

So now that that’s out in the open, I guess it’s safe to say that when it comes to writing, I’m totally a plotter.  I can sit on an idea for weeks (if we’re being conservative) just planning out who the characters are, certain scenes, etc.  I can’t even begin writing until I have at least a few scenes in my head.  I like having some kind of outline of events for my novel.

Now, this doesn’t necessarily mean that I plan and plot in a nice, neat order. Take a look at the image to the right. Most of the time, this is how I do my outlining. I’ll get an idea for about three-fourths of the way through and have that scene totally worked out.  And then I’ll come up with a beginning.  And then the ending. And then something right around the middle.  And when I’ve come up with several scenes that are spread randomly throughout the novel, I finally begin to write.

When I plot and write like this, I realize that I have a tiny bit of pantser in me.  Looking back at the image above, when I get to the inevitable Point of Question Marks between Idea Number 2 and Idea Number 4, I try to just wing it.  So the lead just got transported back in time, but she hasn’t reached the scene where she is tried for witchcraft? Well maybe she could meet a bushy-bearded man named James Garfield?

Because of my plotting nature, this point, the Point of Question Marks, can become the Moment Where I Experience Writer’s Block that thing where I can’t come up with any more ideas.

There’s no such thing as writer’s block. That was invented by people in California who couldn’t write.
Terry Pratchett

This isn’t always the case; sometimes I come up with the best ideas off the top of my head. That’s why I don’t see myself as a strict plotter. I don’t plot out the whole novel; I come up with various scenes throughout the novel and then fill in as I go. Yeah, sometimes I get stuck because I’m not as good at pantsing as I am plotting. But I’d rather have a little bit of mystery waiting for me when I begin writing, rather than have the whole novel ready in my head before I even write a word.  As James Scott Bell explains in his book Plot and Structure, plotters run the risk of lacking spontaneity, which the pantsers have in abundance. I don’t want my writing to become boring. So while I may be an outlining freak, I still have some pants. My pants are just more like booty shorts.

Does It Really Matter?: Plotters, Pantsers, Outlines, or No Outlines

Posted: January 30, 2013 | Author: Cathy Day | Filed under: Uncategorized | Tags: NOP, OP, pantser, plotter | Leave a comment
Brent Smith
Outline person or no outline person? Plotter or a pantser? These are pretty important questions in all walks of writing, as it determines literally everything about style, structure, and how long one spends actually constructing their story.  I’d posit that the terms themselves don’t even matter. As writers, we all crave the best and most efficient way to tell our stories. No two people work the same however. This is the great thing about working in a classroom with fourteen other writers. I’ve been able to see first hand, and talk to others in a small, controlled environment about process and it’s pretty easy to determine that writing process might as well be as deeply infused and unique as the very DNA they possess.
“Well, where do you sit on this line?” you may be asking (I hope, because I’m telling you anyway!). I personally believe I have a pretty unique approach to the process as I do a unique mix of plotting, pantsing, outlining, and not. It’s easy to begin with how well I organize my own life. Let’s just say that my method of organizing is…unique to say the least. This isn’t to say I don’t know where anything is. My delicate filing system usually just begins at my floor and ends on my coffee table. This behavior used to concern me as burgeoning writer, because I assume all writers were hyper-organized people who had their stuff together. Then I met a few of them. While a lot of them are those hyper-organized types, there are plenty of us who aren’t and produce equally tangible work. I like to begin any large piece a free write, exercising my characters, their wants, and needs. I like my characters to meet at the bar, like actors before a big movie. They grow familiar with each other, and understand what makes each other tick. I then save those free writes to a very dark place at the bottom of my Dropbox folder hidden within ten other Dropbox folders, and the show begins.
I’m not completely lawless though, when undergoing large projects I will sketch very rough outlines but these usually consist of one or two sentences. My notes on my iPhone are about as packed as can be with one or two word descriptions of things I’ve observed. I do this so when I read these things later, I have an excuse to break away and reinterpret my own thoughts. I can break this back down to process being different for everyone. Due to growing up in a family that deeply infused micromanaging smaller situations for the better of the bigger picture, I’ve developed a sense for how the smallest ripples can foretell a tsunami. I think in these terms on the fly, and it’s very easy for me to establish elements in my work.
One of the most prolific poets of recent memory, Charles Bukowksi, was also questionably organized. According to his almost four hours of interview footage in The Bukowski Tapes he did not identify as a worker because he didn’t want people to assume he was doing another 9-5 to job. He considered the process much more chaotic than that, and many people called him a bum. He also famously said during the tapes that he wrote as the words came because he wanted to “write down the words the way they were supposed to be”. This is a pretty important lesson. This isn’t to say that organization is by any means the devil, but  in my, and Bukowski’s experience, it can ultimately stifle the initial message.
What all of this really goes to show you is that if you feel like you can’t be a writer because you don’t hyper-organize your life, or you feel like your process is just too unkempt comparable to others, I’d suggest you just shut up and write. Plot it, pants it, outline it, or don’t. While it’s good to analyze and accept what kind of writer you are, these terms don’t really matter. It’s just as good as anyone else, because there is no wrong way to plan. To try and subvert that is stifling your voice. Embrace the chaos, let it come out in your work, and keep writing.