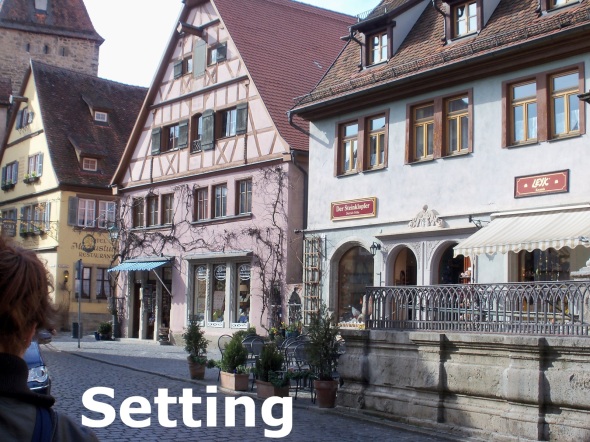 The Setting of your novel is one of the most important tools that a writer has. It’s the reader’s eyes and ears into the world that you are creating or writing about. Setting is one of the first things that lets a reader know just what kind of book they’re reading. Are you in a fantasy world with mystical creatures? Are you in a gritty city full of crime? Are you in a quiet town where not much happens? See, just asking questions like that can help shape what’s going on in your plot.

What if I don’t think my setting is important?

Setting is always important! It doesn’t matter if you’re describing Hogwarts or your town’s local high school. If we don’t know where your characters are, we can’t be a part of that world. Reading is like travelling. If you don’t take pictures, people will have no idea where you’ve been. If you don’t know your own setting, your characters (and readers) may end up getting lost.

With just a little bit of setting description, the same scene has so much more life in it. So you shouldn’t think your non important small town doesn’t need big words to fill it. Because if Stephen King can create small towns in Maine and make each of them distinct and interesting, you can build up one setting for your own novel. Your setting is important, even if you don’t think it is.

An example would be something like “I pushed open the old porch door, wary of its rusty hinges that wanted to give out. Stepping out on the rickety old porch, I surveyed the tall grass around my house, looking for the sign of the noise. The cool autumn air blew the dead leaves littering my driveway up around my feet I kicked them away and heard the soft crunch of them breaking.” The setting is described by the narrator as they react with it instead of just having them make a list of things they see around them.

Many writers will try to write setting around their character instead of with them. You need to make sure your character notices the setting instead of just talking about it. Say your character is called Mary and she’s in a room with a floral coach. Tell the reader that Mary interacts with that floral couch by leaning against it, sitting on it, etc and not just that saying there is a couch in the room.

An example of this would be “He picked up the old picture frame sitting on his grandmother’s shelf. The glass was cracked, but he could still see his grandfather’s smiling face through it. Setting the photo back down, he crossed the small room to her old brick fireplace and stooped down to poke at the fire with the iron poker. The brick leading up to the chimney was sooty, and he made a mental note to clean it out for his grandmother.” Instead of just describing the things in the room, the unnamed narrator interacts with them, making them important.

Remember there are 5 narrative modes

You can combine these to your will in order to set the best setting you can! Switch it up with different combinations. Remember: dynamic and organic > static and inorganic

In class this week, we did a really cool exercise JT Dutton called “Here is not There, or Setting as Character”. Cathy Day links to it on her blog here. If you’ve already done that exercise, try going to The Wilderness Downtown and typing in a random address. Take wherever it gives you and describe it as though you were telling someone who’s never been there what it looks like.

To Do for Week 6: Setting

I have a lot to say about setting. Why don’t you just go here and read it.

Your writing assignment for this week is to make sure you’ve spent some time this week thinking about and/or writing about the setting for your novel.